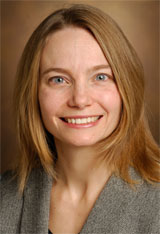 H. pylori is the most common pathogen colonizing humans today. Colonization with H. pylori can lead to detrimental outcomes including gastric adenocarcinoma, MALT lymphoma, peptic ulcer disease and atrophic gastritis. H. pylori is the only bacteria classified by the World Health Organization as a carcinogen. Yet, H. pylori’s classification as a bone fide pathogen has been questioned due to an inverse correlation between H. pylori colonization and immune-mediated diseases, such as allergic airway disease and inflammatory bowel disease. These divergent outcomes can be attributed to a number of factors including host, environment and pathogen.

My laboratory has made noteworthy contributions to understanding which host factors drive gastritis during chronic H. pylori infection. Specifically, our research has described how cytokines produced by proinflammatory T cells influence control of H. pylori colonization and gastritis. A major role of these T cells and the cytokines they produce is to recruit innate immune cells which lead to increased inflammation. Some stresses of the immune response include sequestration of nutrient metals (nutritional immunity), oxidative stress and metabolic stress. Despite the chronic immune response, H. pylori persists for the life of the host. A fundamental gap in our knowledge is how H. pylori responds to and flourishes under the pressures of the host’s immune response and how diet modifications might alter those host responses.

Projects in Dr. Algood's lab focus on pathogen - host interactions in chronic infections and during chronic inflammation. Her main model system is Helicobacter pylori infection. Helicobacter pylori is a Gram-negative pathogen which can chronically colonize the human stomach and lead to adverse disease outcomes such as peptic ulcers or gastric cancer. Her projects investigate how T cell cytokines influence gastric epithelial cells responding to infection but also even more broadly how T cell cytokines activate other cells to protect the epithelial cells and the mucosal barrier they maintain. Dr. Algood's research utilizes H. pylori as a model mucosal pathogen, but her long-term research interests lie in understanding the balance between the mucosal immune responses, pathogens, and normal flora. While immune responses may be necessary to control bacterial colonization at the mucosal surfaces, the immune response must also be well controlled to maintain epithelial cell integrity and to control infiltration of other potentially damaging immune cells. Th17-driven immune responses have been implicated in pro-inflammatory activity and induction of chronic inflammation; she would like to better understand how the Th17 response is balanced. Moreover, since the inflammatory/immune response is not sufficient to clear the infection, Dr. Algood's laboratory is beginning studies to investigate how the bacteria persist while combated with the stresses of the immune response.